A few weeks following the start of the vote in the primary elections and caucuses, Hillary Clinton has the lead when voter intention is taken into account among Democratic Hispanic voters, according to the new exclusive public opinion poll from Noticias Univision and The Washington Post.

In the confrontation with her only rival in her party, Vermont Senator Bernie Sanders, the former secretary of state has 57% of the support of Hispanic voters opposite 28% for Sanders. This 2 to 1 advantage, however, is smaller than the 3 to 1 advantage that Clinton had over Sanders in the first Noticias Univision survey of Hispanic voters conducted in June of 2015.

Read here the results of the poll

The new poll reveals that Sanders has come a long way among Hispanic voters, who didn’t even recognize him earlier. By contrast, now 60% of those interviewed have a favorable opinion of him, barely seven points less than Clinton.

Clinton’s lead has diminished compared with the Univision survey conducted in June of 2015. 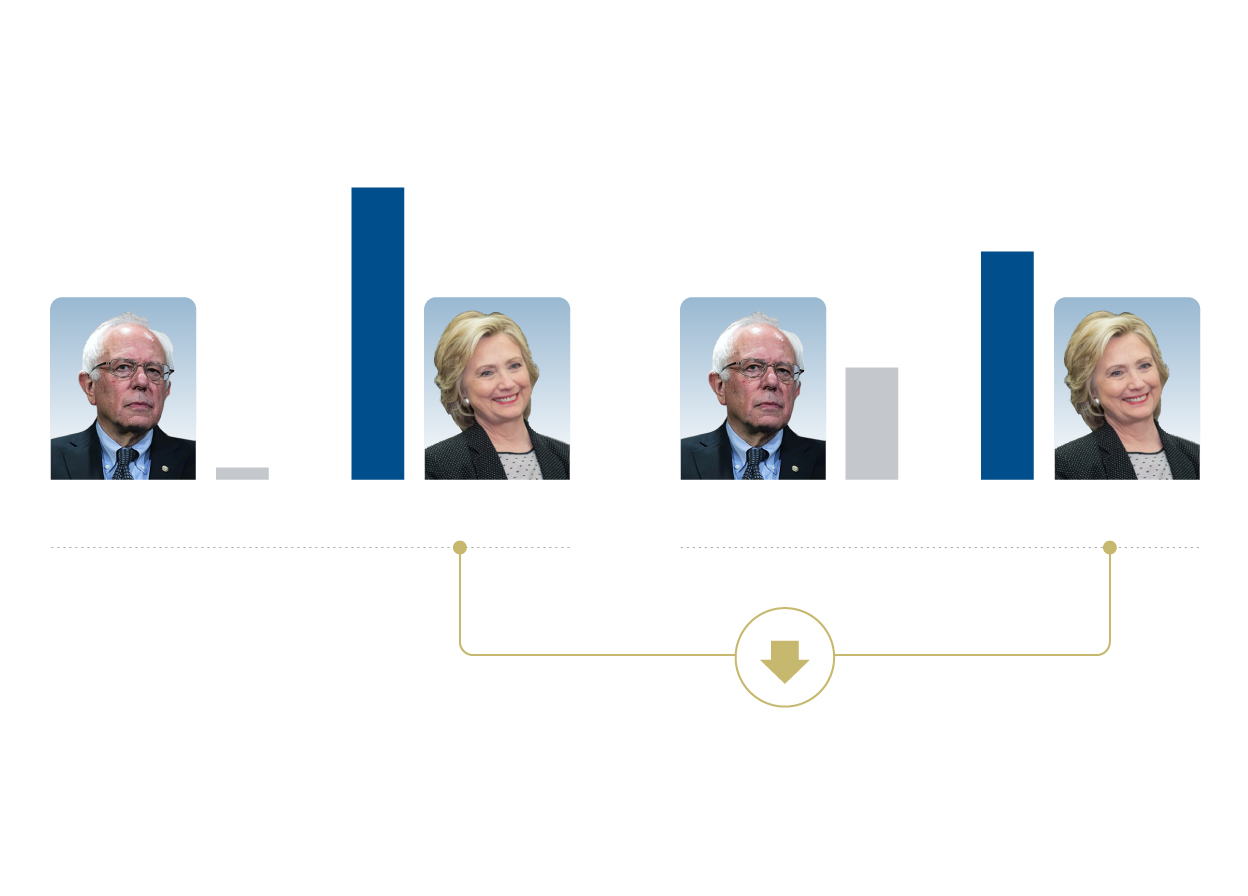 Clinton’s lead has diminished compared with the Univision survey conducted in June of 2015.

On the Republican side, Florida Senator Marco Rubio has the lead among Hispanic voters registered in his party, according to a survey conducted by Democratic firm Bendixen & Amandi and Republican firm The Tarrance Group. Rubio has 27% of the intended vote by Republican Hispanics, followed by real estate billionaire entrepreneur Donald Trump with 23%, Texas Senator Ted Cruz with 19%, and former Florida Governor Jeb Bush, who has already withdrawn from the race, with 12%.

The Republican pre-candidates have yet to conquer a potentially decisive 24% of Hispanic voters: the 12% that had a preference for Bush and another 12% that are undecided. Nevertheless, Rubio will probably benefit the most from Bush’s withdrawal, because he is the Republican candidate most chosen by voters when asked who would be their second choice. This latest change may in fact increase to 34% the support received by the Florida Senator from Republican Hispanic voters. 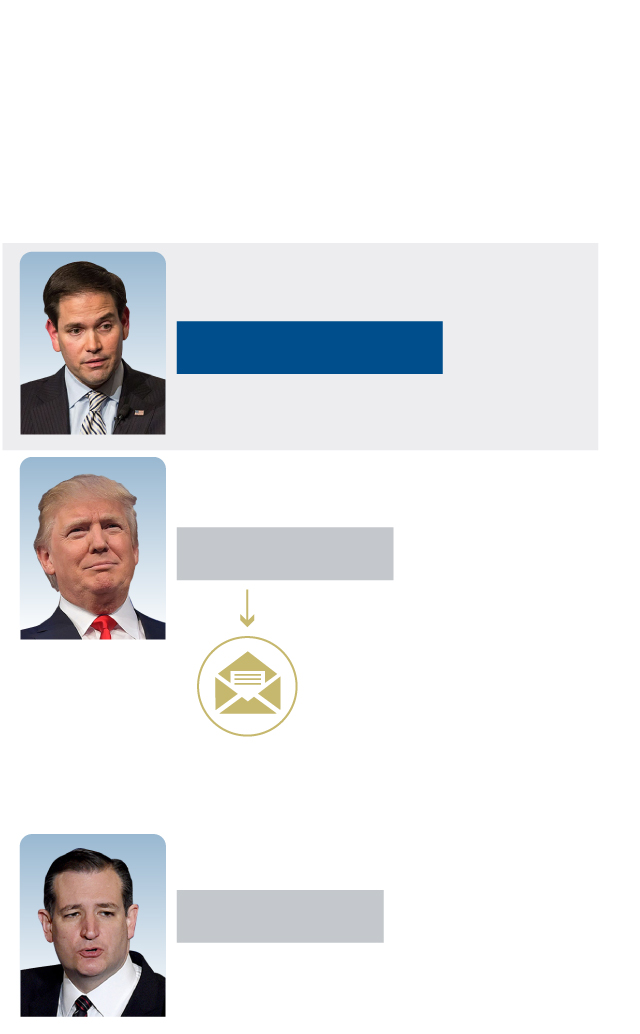 Marco Rubio is the preferred candidate among Republican Hispanics, over Donald Trump and Ted Cruz

Less than one fourth of Republican Hispanics plan to vote for Trump. 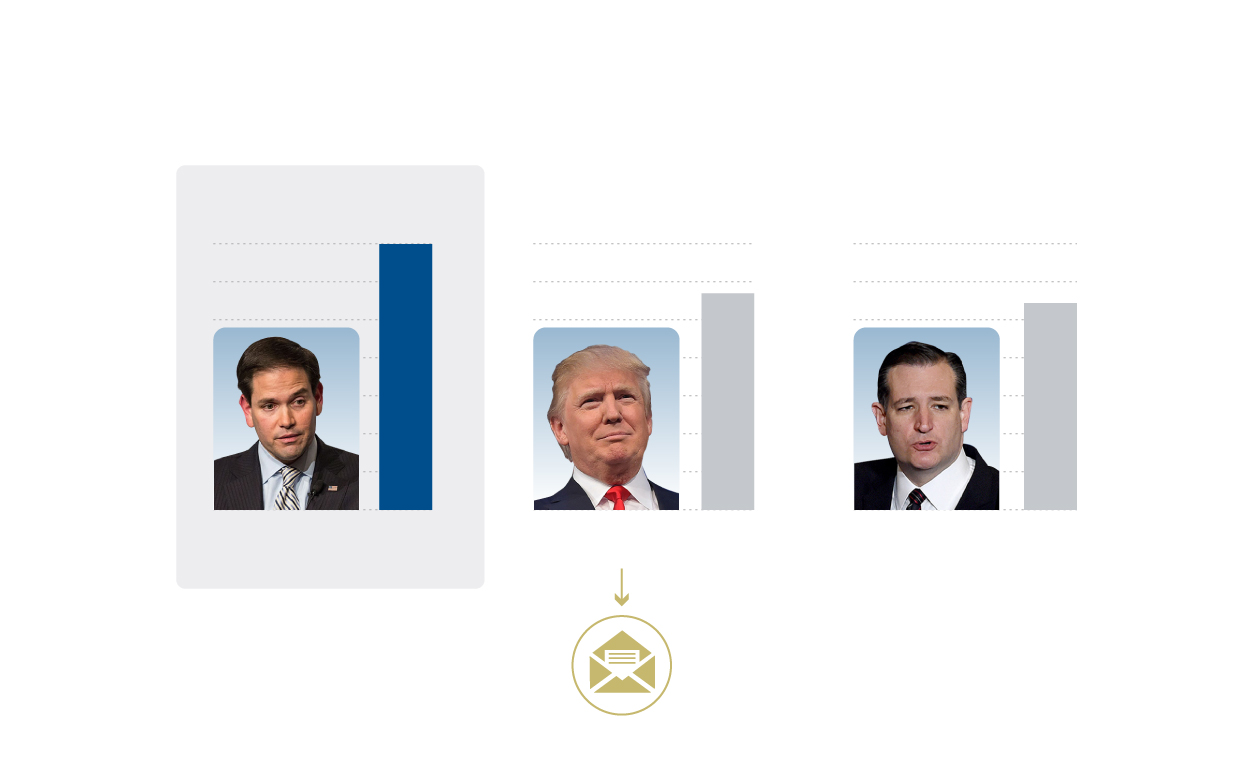 Marco Rubio is the preferred candidate among Republican Hispanics, over Donald Trump and Ted Cruz

Less than one fourth of Republican Hispanics plan to vote for Trump.

Even though Trump appears in second place with respect to preference among Republican Hispanics, the bipartisan survey suggests that he continues to face a serious image problem among the country’s Latino voters. Three out of every four Republican Hispanics prefer other candidates from their party.

For the general election in November, Marco Rubio is the most supported Republican among Hispanics. 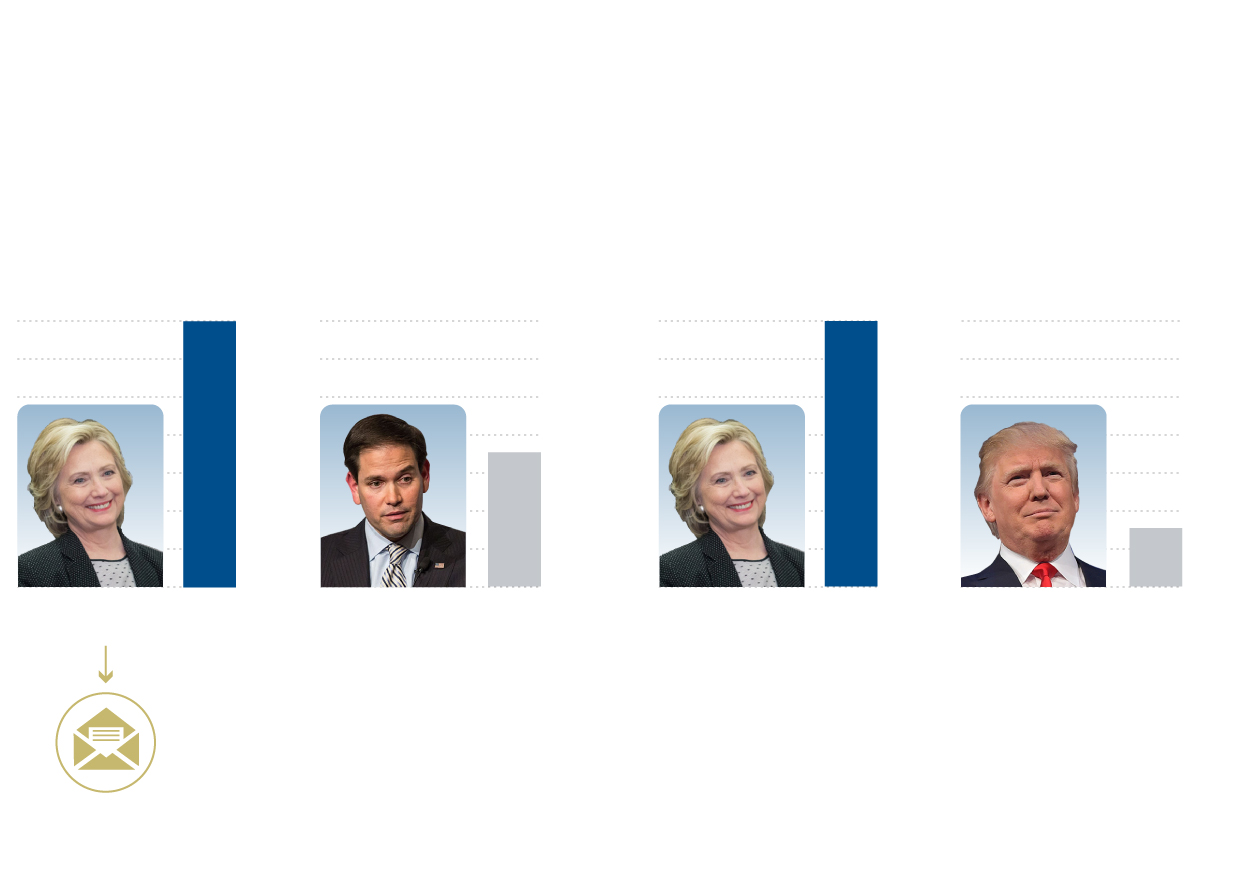 For the general election in November, Marco Rubio is the most supported Republican among Hispanics.

For the general election of November of 2016, Hispanic voters prefer Democratic presidential candidates over Republican presidential candidates. If that election were to take place at this moment, Hillary Clinton would win the Hispanic vote by 61% as opposed to 31% for Marco Rubio, the aspiring Republican that comes closest to her. She would give Donald Trump a beating among Hispanics, by winning 72% of their vote as opposed to 16% for Trump.

Bernie Sanders, the other Democratic candidate participating in the race, would have similar results. He would win over the Hispanic vote by 57% compared to 33% by Rubio, the Republican that comes closest to him. And he would tumble Trump 72% to 16%. The percentage of undecided voters hovers between 8% and 12%, depending on the individual confrontations posed by the exclusive poll from Noticias Univision and The Washington Post. 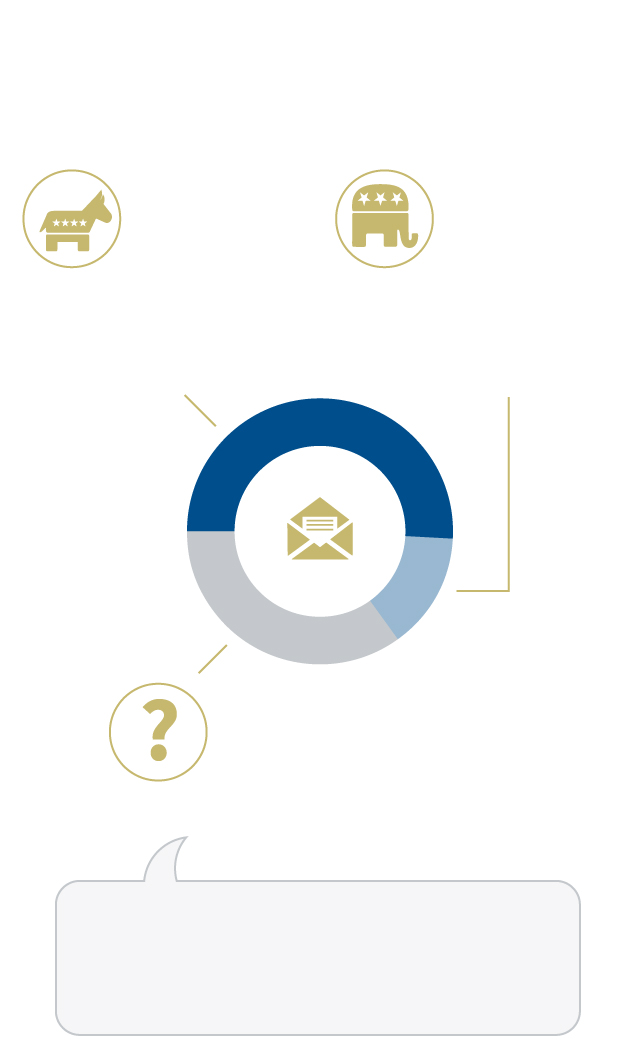 Would support the Democratic candidate

Would support the Republican candidate

Many of the candidates’ campaign efforts could potentially be focused on this 35%. 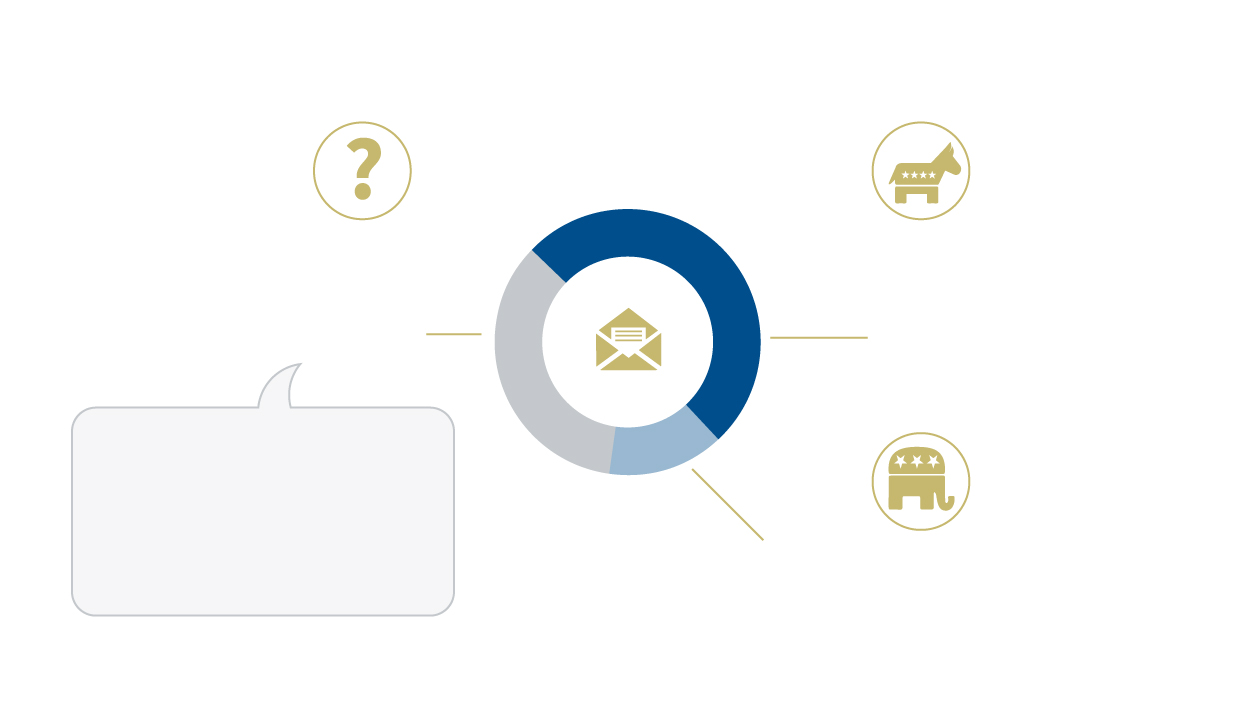 Would support the Democratic candidate

Many of the candidates’ campaign efforts could potentially be focused on this 35%.

Would support the Republican candidate

Hispanic voters’ preference for Democratic candidates is consistent with their opinions of the country’s two large parties. While 65% of those interviewed say that
Democratic Party leaders represent their points of view, only 38% have the same opinion about leaders of the Republican Party. And a clear majority of Hispanic voters have more trust in the Democratic Party for managing the economy, matters of immigration, the healthcare challenge, and even the issue of same-sex marriage.

A major division between those interviewed is shown only with respect to the threat of terrorism, as 38% say they trust more in the Democrats for dealing with that problem, while 33% say they trust the Republicans.

Nevertheless, Hispanic voters have differences of opinion about President Obama’s performance, which suggests opportunities for the Republican Party and its main president candidates. Forty-three percent of those polled say that Obama has improved things for most Hispanic Americans. But 20% say that he has made matters worse and 33% are of the opinion that he has not made much of a difference in their lives.

Furthermore, almost half of those interviewed, 48%, are inclined to vote against any candidate who tries to continue Obama’s deportation policy, while barely 17% are inclined to vote for a candidate with that intention. And a clear majority of 54% believes that things are going in the wrong direction in this country, while only 33% thing they are headed in the right direction. 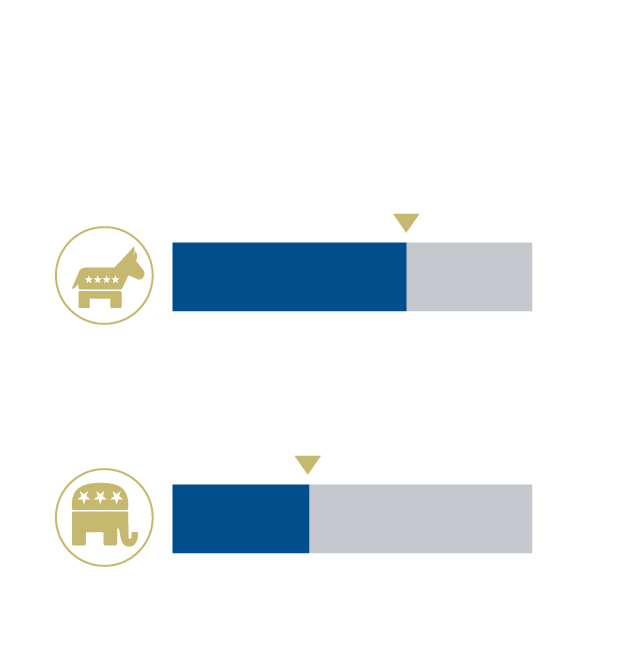 Just like last summer’s survey, the new exclusive poll by Noticias Univision and The Washington Post reveals that jobs and the economy is the issue that most concerns
and motivates Hispanics in the current presidential race. Three out of every 10 voters interviewed, or 33%, say this is the most important issue when it comes time to deciding whom they would vote for president.

Nevertheless, the issue of immigration has also become a priority for that group of voters, after it climbed from fourth place in the previous survey to second place in this poll. Seventeen percent of Hispanic voters consider that immigration will be what decides their presidential vote, 16% say the same thing about education, and 11% about healthcare. Seventeen percent may appear to be a statistically insignificant percentage.

But the issue of immigration becomes more relevant when other survey results are taken into consideration. For example, an overwhelming 82% of Hispanic voters say they would like for the next president to support a pathway to citizenship for undocumented immigrants and 53% would not vote for a candidate who opposes that pathway.

Fifty-four percent would like the next president to keep it, while 35% prefer the opposite. Also, 71% would like the country’s future leader to be in favor of increasing the minimum wage from $7.25 an hour to $15.00 an hour. Nevertheless, almost half, 47%, would be willing to support a presidential candidate who would be opposed to increasing the minimum wage, provided he or she would coincide with their own opinions about other important issues.

The bipartisan poll also asked Hispanic voters about the US trade embargo against Cuba. A clear majority of 64% said they were firmly in favor, or slightly in favor, of having Washington eliminate it, while 19% expressed the opposite opinion. The exclusive poll by Noticias Univision and The Washington Post was conducted among 1,200 registered voters during the week starting on February 11th and ending of February 18th, and has a margin of error of +/- 3%.