Reacciona
Comparte
Rows and rows of uninhabited new homes in The Villages sit next to a nature preserve. Crédito: Jessica Weiss

THE VILLAGES, Florida – Elaine McPherson stands poised and smiling at the entrance of a sunny storefront in this central Florida retirement community. A jovial 65-year-old, she wears a short-sleeved red polo shirt and a red, white and blue scarf. A glittering elephant necklace is draped around her neck.

McPherson is working her weekly volunteer shift at the Sumter County headquarters of the Republican Party. Many of the people who’ve stopped by are looking for Trump signs to hang on their golf carts, the preferred mode of transportation here.

Just north of Orlando, The Villages is Florida’s largest retirement enclave. An idyllic stretch of homes, golf courses and community centers, it stretches across three counties in an area larger than Manhattan. Though residents hail from across the country and come from a range of socioeconomic backgrounds, most are white, middle-class, Christian Midwesterners.

These days, McPherson and hundreds of other volunteers here are working towards one goal: Get Donald Trump elected. They’re pushing voter registration hard in advance of Florida’s October 11 deadline. And in a state where the margins are so small, those efforts could make a real difference come November.

"We’ve lost our conservative viewpoint in this country," says McPherson, who’s originally from Maryland but moved to the Villages two years ago, from Orlando. "If Hillary wins it will be the last step before we’re a communist country."

Florida, the country’s largest battleground state, is on both candidates’ minds, with polls suggesting a near-even race here. The rule has held for decades: Lose Florida, lose the election. A GOP candidate hasn’t won the election without Florida since 1923, when Calvin Coolidge became president. Races in the last three elections in Florida – two governor’s races and the 2012 general election – have been decided by just 1% of the vote.

Especially important is the I-4 corridor in the middle of Florida, the stretch between Tampa on the west coast and Daytona Beach on the east, with Orlando in the middle.

In this part of the state, the demographics have shifted dramatically since the last general election. While Democrats can count on an influx of Hispanic – namely Puerto Rican – voters, Republicans' most faithful supporters here are older whites. And that population has grown, too, in some counties dramatically.

A generation invested in civics, retirees are dedicated voters: nearly 70 percent cast votes in the 2012 presidential election nationwide. In Florida, 58% percent voted for Romney, versus 41% for Obama.

But any advantage Republicans have among retirees in Florida bumps up against overwhelming Democratic support among Latinos. In 2012, 60% of Latinos voted for Obama, versus 39% for Romney. 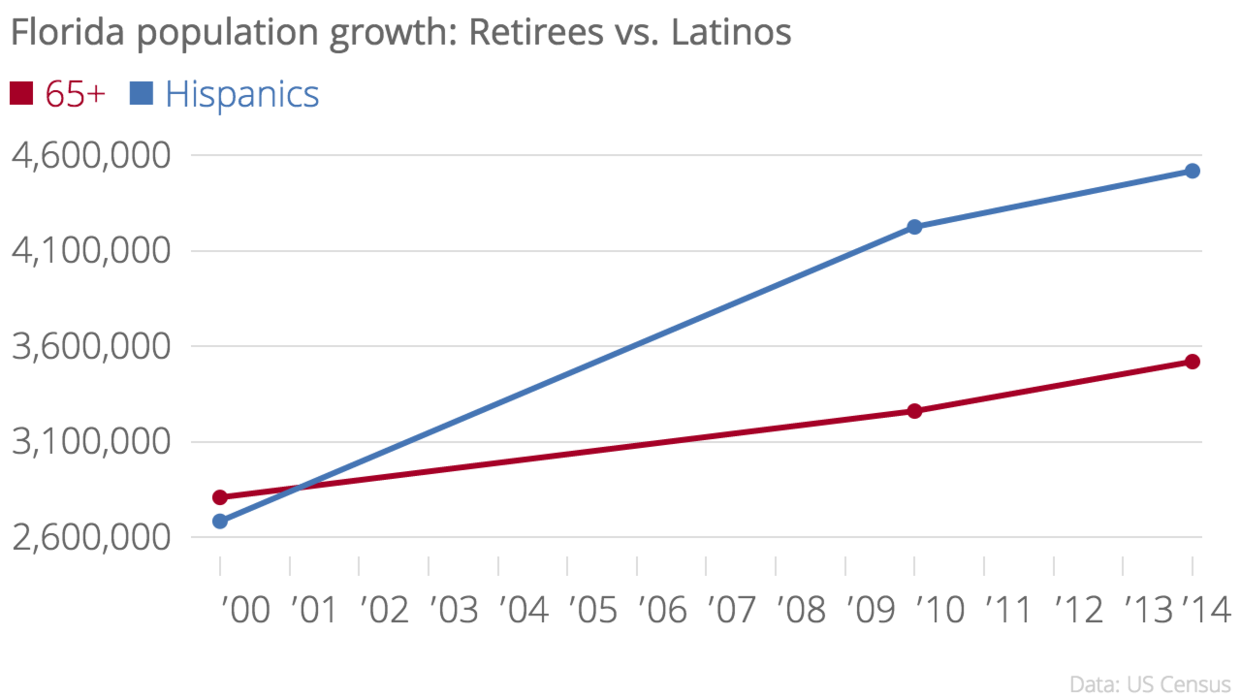 Sixty-five-and-over white voters in Florida could keep the race tight, says Steve Schale, a political strategist in Florida who ran President Barack Obama’s 2008 campaign in Florida. Nowhere is that more apparent than The Villages.

"There are not a lot of places in Florida where you’ve seen white migration, but it is happening there," Schale says. "If Republicans want to win Florida, they have to continue to push down the Democratic share of the white vote. That’s really the only place [in the state] where Republicans are going to be able to find enough votes."

Florida has long been a haven for retirees. Along with the growth of air conditioning and air travel in the 1960s, so came retirees and snowbirds from up north.

As a result, Florida has more senior citizens that any other U.S. state, with around 25 percent of the elligible voting population aged 65 and over. And those numbers continue to expand. Between 2009 and 2014, the state’s 65-and-over population grew 14.6%, from 3 million in 2009 to 3.4 million 2014, according to the US Census Bureau. That’s compared to 6.4% overall growth in the state.

By comparison, Hispanics now make up 18% of the elligible voter population in Florida, and about 15% of registered voters.

Retirees live in communities up and down Florida’s coasts, on the panhandle and in the central part of the state. In South Florida, Jewish seniors number roughly 500,000 voters, and are a bastion of Democrats.

Last year, The Villages was the fastest growing metro area in the country for the third year in a row. What began as a modest mobile home community in the 1970s has expanded into a massive retirement haven of nearly 120,000 residents. Once inside, seniors can join thousands of clubs – from clogging to baton twirling to Civil War history – and attend free nightly entertainment at three different town squares. There’s also a vibrant singles scene.

And many of those residents are Republicans. Before his death in 2014, The Villages’ billionaire developer Gary Morse was a top GOP mega-donor. Morse served as co-chairman of the Florida finance committee for Mitt Romney's 2012 presidential campaign, and was a member of the Electoral College for George W. Bush. The Villages’ newspaper, radio and television all retain a decidedly conservative flavor.

"The Villages is redder than the red on the Confederate flag," says Shelly Newman, a Democrat who moved to The Villages from Detroit two years ago.

John Calandro, a Villages resident and the Sumter County Republican Party Committeeman, says Republicans in The Villages were quick to support Trump after the primary.

"Since the day we opened the headquarters [in July], we’ve had a hard time keeping signs, bumper stickers and golf cart signs in stock," he says. "Some people didn’t immediately support him but Trump is big here now."

(Democrats who sought to rent a similar headquarters space in one of The Villages’ downtown areas were denied, according to Dave Koller, a Democrat who is running for the congressional seat of Florida's 11th District.)

Overall, the older vote in Florida has leaned a bit more Republican in recent years, says University of South Florida political science professor Susan MacManus. "The very oldest FDR generation has shrunk in size," she says. "A lot of people think that you can’t talk about anything besides social security and Medicare to reach this group. But that’s an outdated view of politics."

Calandro points to a generation of "hard-working Americans" that lived through the Cold War, concerned about issues like national security and the nation’s debt. Forty percent of The Villages residents are veterans, and many served in Vietnam.

In recent weeks, there have been a number of Trump events in The Villages, including golf cart caravans and flag -waving events on main streets. A local movie theatre is showing “Hillary’s America,” a film about alleged corruption in the Democratic Party. This weekend, the Republican Federated Women’s Club of The Villages will host an event in which members read from the U.S. Constitution and eat apple pie.

On a recent Thursday afternoon, dozens of veterans from The Villages’ "Band of Brothers" club gathered outside City Fire, a local bar.

"We’ve reduced ourselves to a pansy nation," said Ralph Crane, 64, a Vietnam vet.

Crane says that he, like many others in The Villages, think it’s time for a "non-politician" like Trump to be president. "When he talks, he talks like we do," Crane says.

Schale says that The Villages alone is not enough to swing central Florida, but when combined with old manufacturing counties on the east coast whose economies have been hard hit since the Great Recession, Republican trends "almost balance out" Democratic trends in the Orlando area.

There are other pockets of older, conservative, white voters across the state that will turn out big for Trump, too, says Republican strategist Jorge Bonilla, such as those near Tampa on Florida’s west coast. "These are places that you have to engage," Bonilla says. 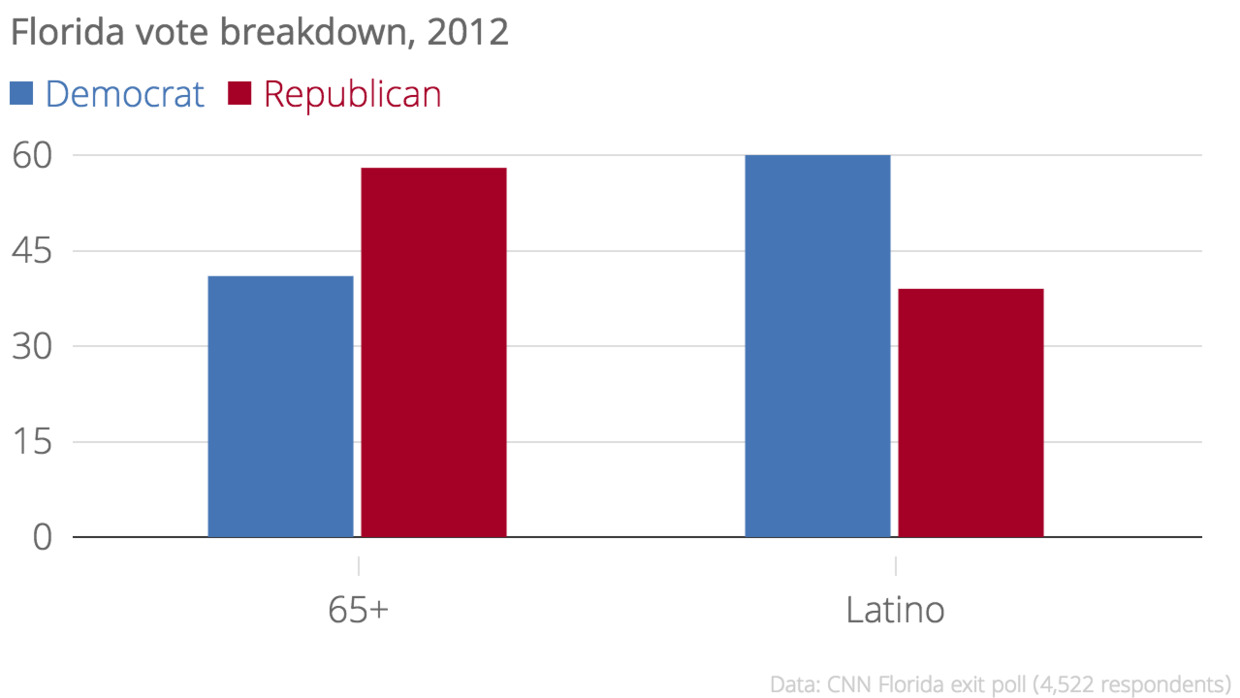 Trump supporters point out that Florida’s Republican primary – in which Trump crushed conservative native son Marco Rubio – drew record turnout, signaling how Trump has energized disenfranchised voters. But others say that could be explained by Trump inspiring new voters both for and against him.

"When you look at the numbers, Clinton is doing worse among Jews in Florida than any Democrat in decades," Brown says. "In 2012, Obama had a historic low and Hillary Clinton’s level of support among Jewish voters is lower than that."

However, Trump is doing far worse. In 2012, Obama got 68% of Florida’s Jewish vote, according to exit polls, just two points more than Clinton’s current rating. Republican nominee Mitt Romney got 31% in 2012, eight points better than Trump.

"Jewish seniors will prevent Trump from blowing it out of the water among 65-and-over voters," Schale predicts.

As Florida’s demographics continue to shift, the state could grow by some 5 million residents over the next two decades, especially among non-white minorities, Schale says.

"In a very divided state, you really have to have people on your campaign to communicate with different generations," MacManus says.

The Clinton campaign has been working to register voters in Florida since August. It now has over 50 field offices around the state. Trump’s team has just a handful of offices. And yet polls suggest the state is nearly tied.

In The Villages' Republican headquarters, McPherson says she would love for Trump to pass through The Villages. But, "Trump doesn’t really need to make a stop here," she says. "We already all support him."