A large majority of people living in cities along the U.S.-Mexico border oppose the construction of a wall that divides the two countries, according to results of a survey conducted in April by Cronkite News at Arizona State University, Univision and the Dallas Morning News.

Conducted in 14 cities – seven on each side of the 1,951-mile border from San Diego and Tijuana to Brownsville and Matamos – the survey, found that 86% of people living on the Mexican side and 72% of those on the U.S. side are opposed to a wall. Of the minority in favor, only 2% on the U.S. side believe Mexico should pay for the wall's construction.

"The wall is seen as a symbol of division and what border residents want is connectivity," Christopher Wilson, deputy director of the Woodrow Wilson Center's Mexico Institute, told Univision News. "People living on the border feel very connected to the people on the other side."

Should the United States build a wall to secure the border between Mexico and the U.S.?

Tijuana is the city with the highest rate of opposition to the wall. 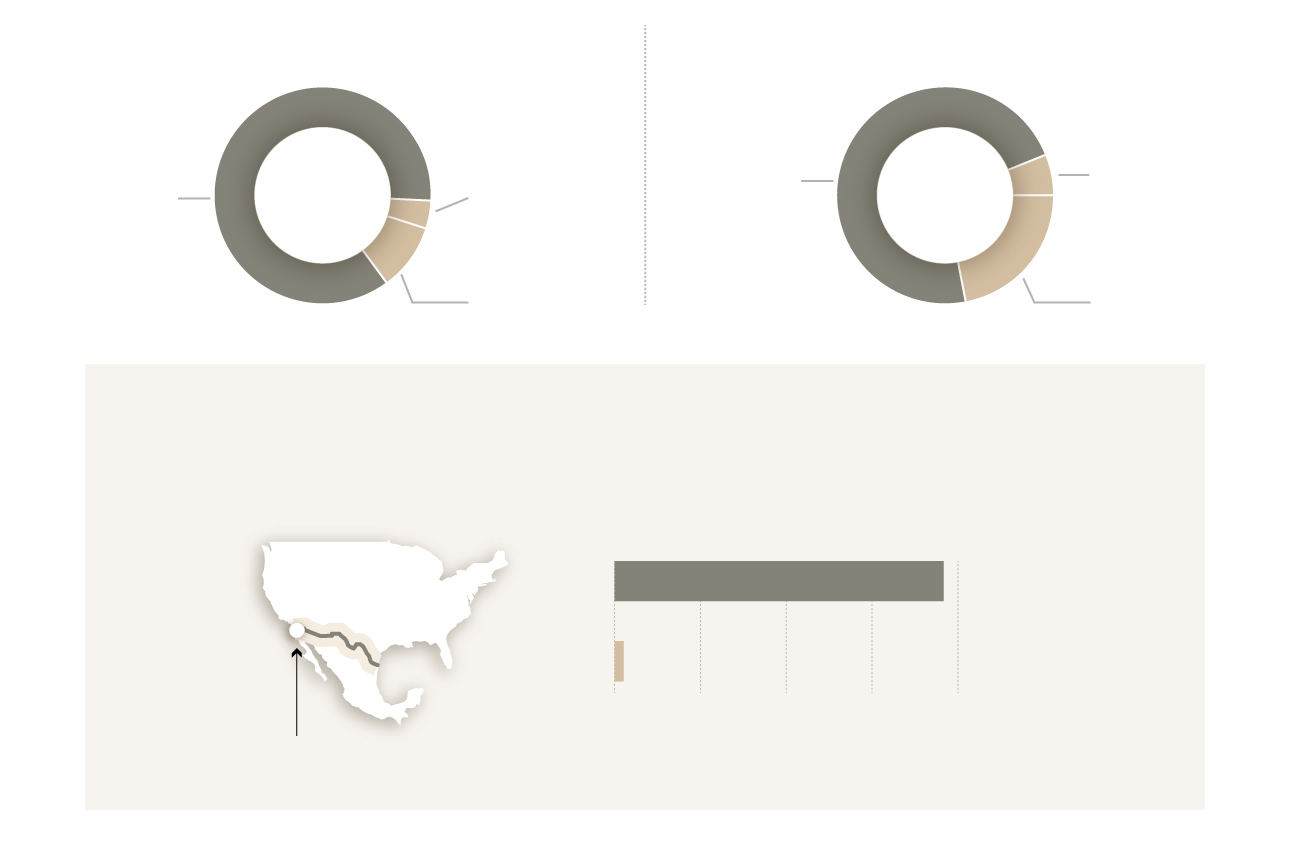 Tijuana is the city with the highest rate of opposition to the wall.

Most survey respondents – 69% on the Mexican side and 59% on the U.S. side – believe the tone of the current U.S. presidential campaign is hurting the relationship between the two countries.

While border residents oppose the wall, it doesn't mean they are against improving security. In fact, one of respondents' biggest concerns, especially on the Mexican side, is crime and insecurity, even above employment and income.

Wilson notes that most border residents are concerned about security at legal border checkpoints, in contrast to the long stretches of desert where migrants and traffickers cross, which has been the main focus of U.S. government security efforts. That means security investments haven’t taken into account locals' real concerns.

On both sides, the feeling of dependency is mutual

Baselice & Associates conducted the border survey after carrying out a similar poll in 2001. "We have the advantage of having asked many of the same questions on this survey 15 years ago, "said Mike Baselice, the company's president.

The 2001 survey was done before the September 11 terrorist attacks, after which border traffic worsened due to heightened security proceedings. At the time, the general sentiment on the border was more optimistic than today: about 40% of residents on both sides believed things were improving, compared to less than 20% today.

The change isn't surprising, given the events of the last 15 years – from drug trafficking to the recession – and their impact on the border. But far from creating divisions between the two countries, these events have deepened the dependency between them.

While both sides had slightly different priorities, they expressed similar concerns about issues such as security, employment and the economy in general. But more importantly, they believe their community is heavily dependent on the other (69% in Mexico and 79% in the United States).

What are the biggest problems you and your family currently face? 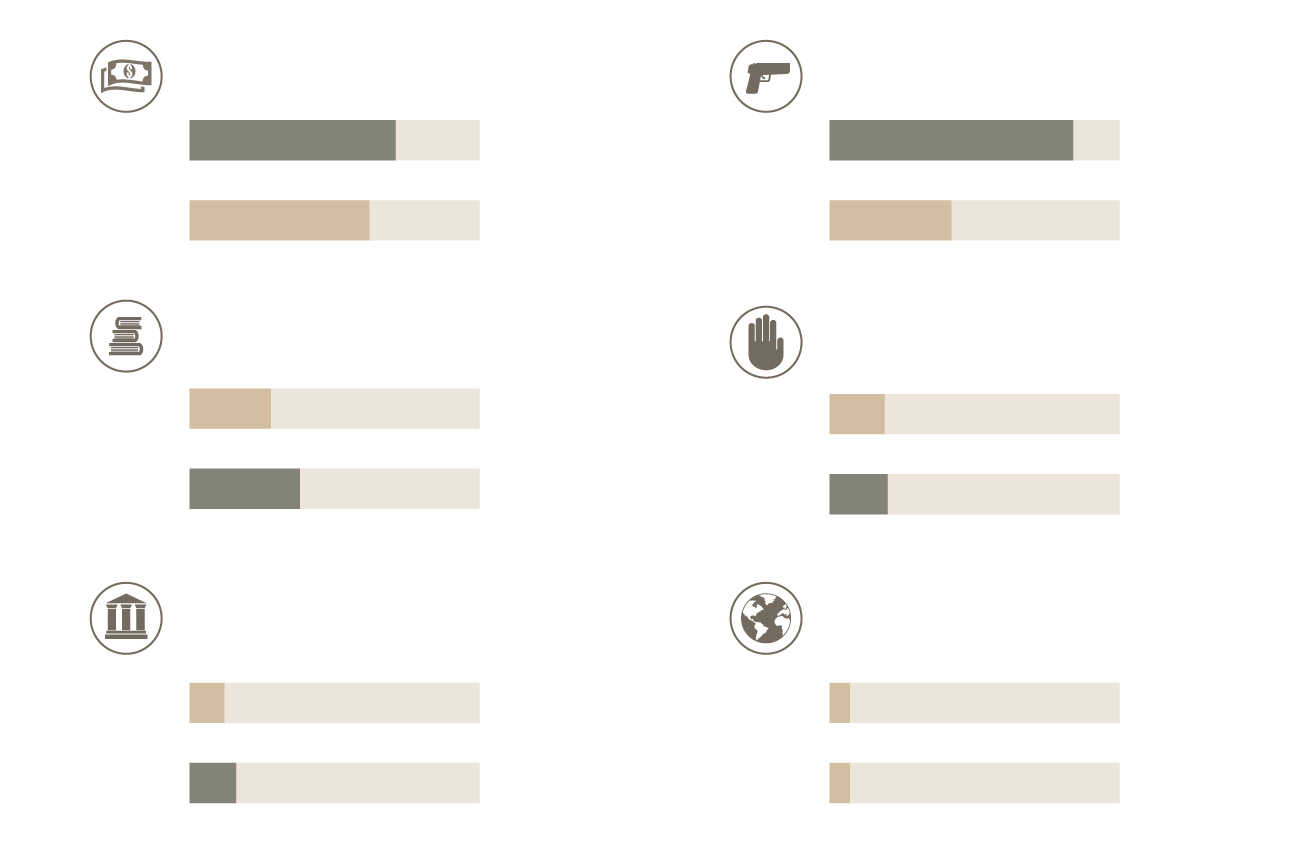 In 2001, 62% of Mexicans and 71% of Americans were in favor of their neighbors crossing the border to work in their community. In 2016, the figures rose to 85% and 76%, respectively. Moreover, for every 100 people living on the U.S. side of the border, 82 support a direct path to citizenship for undocumented Mexicans living in the United States.

In spite of the rhetoric in the rest of the country, 86% of those on the U.S. side say they feel at ease with their neighbors on the other side of the border. Around 79% of Mexicans agree.

The border isn't homogeneous. Although the survey's margin of error increases on a local level (it's 3.6% for the whole border), some cities are distinct.

The most prominent case is undoubtedly that of Ciudad Juarez. Known as the most dangerous city in the world between 2008 and 2010, today it's undergoing a cultural and economic revival through a process of "pacification." While criticized by human rights activists, the approach managed to significantly reduce crime.

By far, Juarez is the border community with the greatest optimism. It's not just the Mexican city where most respondents say things are improving, but also where people feel safer.

Farther south, however, perceptions are quite different. In the Laredo/Nuevo Laredo and Matamoros/Brownsville corridor, plagued for years by the war between The Zetas and the Gulf Cartel, security remains the biggest concern. There, 63% of respondents think that things are getting worse, 20 points more than the Mexican average.

In other cities, the answers vary. In Tijuana, which has become a tourist attraction due to its cultural and restaurant revival, one of the major concerns is air quality.

Binational cooperation is an important issue on this part of the border. In San Diego, divided by a wall with Mexico, there's no space for a new airport, so Tijuana built a facility known as the CBX that allows Americans to land in the city and quickly enter the United States through a tunnel, without having to sit in an endless line at the San Ysidro checkpoint.