Jose Fernández fled Cuba at age 15 and for many in his adopted city he personified the immigrant experience.

"There's been a death in the family," the Miami Herald newspaper titled an editorial about him on Monday.

"Jose Fernández was us, he was our story," wrote Cuban American journalist Fabiola Santiago.

His life story mirrored that of many in South Florida's large Cuban American community. Born in Santa Clara, Cuba, Fernández defected to the United States in 2008 after several failed attempts. During the boat journey to the U.S., he rescued his mother after she fell overboard.

"The Marlins pitcher with the golden arm made it across the Florida Straits to this country on a boat fleeing Cuba," the Miami Herald wrote in its editorial. "Early Sunday, another boat ride, this one for fun, ferried him away forever."

Despite his young age, Fernández was a huge presence in the clubhouse and a contstant inspiration to his teammates, always the first to cheer others on from the railing of the dugout.

"I gave him the nickname Niño because he was just a young boy amongst men, yet those men could barely compete with him," a devastated team mate, Giancarlo Stanton, wrote on Instagram.

"He had his own level, one that was changing the game. Extraordinary, as a person before the player. Yet still just a kid, who's joy lit up the stadium more than lights could," he added.

The impact of Fernández was felt far beyond the baseball diamond, thanks to his charisma and charitable work. A sellout crowd is expected to show up at Marlins Park on Monday night for its home game against the New York Mets, which Fernández was scheduled to pitch.

Sunday's Marlins home game was cancelled after news of his death but fans came to the stadium anyway to pay their respects and create a makeshift memorial with flowers, candles and memorabilia. The team store quickly sold out of all Fernández #16 shirts.

One 40-year-old Japanese fan fell to her knees and sobbed inconsolably at the stadium on Sunday. Junko Sasaki told reporters she had come to Miami to watch Japanse hero Ichiro Suzuki play for the Marlins. "But I fell in love with Jose, his story, how he came from nothing, how he left Cuba on a boat. He was such a fun player who loved this game so much," she said.

A starting pitcher known for his electric fastball and competitive flair, the Cuban American was a first-round draft pick for the Marlins in 2011, and a two-time major league All-Star.

He was already breaking records and had a likely place in the Hall of Fame. With the end of the season fast approaching Fernández was one of the bright spots of an injury-plagued season for the Marlins who were out of play-off contention.

"He had Hall of Fame-level talent. It felt like Jose could ... be the face of the Marlins a long time," said Craig Counsell, Milwaukee Brewers manager and former Marlins second baseman.

Fernández pitched the last game of his career against the Washington Nationals on Wednesday, striking out 12 batters over eight innings in a 1-0 win. Over his brief career he put together a remarkable home record, with 29 wins and only 2 losses in 42 starts.

It was his best performance of the season, baseball commentators said. After the game Fernández told one teammate he felt it was the best start in his short career, third baseman Martin Prado told the media.

Team executives and Marlins manager Don Mattingly were barely able to speak through their grief at a tearful Sunday press conference.

“When I think about Jose, I see such a little boy,” Mattingly said. “The way he played, there was just joy with him.”

He added, choking up as he spoke: “When he pitched … you just see that little kid that you see when you watch kids play Little League or something like that. That’s the joy that Jose played with.”

Sports columnist Dan Le Batard said Fernández was a rare type of player in today's professional game. "Fernandez played the way the best Latin music feels," he wrote. "He acted like a little boy in a sports world soaked with adult problems and cynicisms that can make us lose sight of the root verb at the center of what he did for a living. To play."

An avid angler, Fernández died in the early hours of Sunday in a boating crash near Miami Beach, Florida, according to the Coast Guard. Two other people were killed in the accident, both friends of Fernández, the Coast Guard said.

The accident is under investigation.

During a press conference the Coast Guard said speed appeared to be a factor in the accident, but there was no indication of alcohol or illegal drugs involved.

The 32-foot-long boat was found upside down on a rocky jetty at 3:30 a.m. Sunday near the entrance to the port of Miami, known as Government Cut, a busy channel at the southern tip of Miami Beach, which is used by pleasure craft, cruise ships and container vessels. 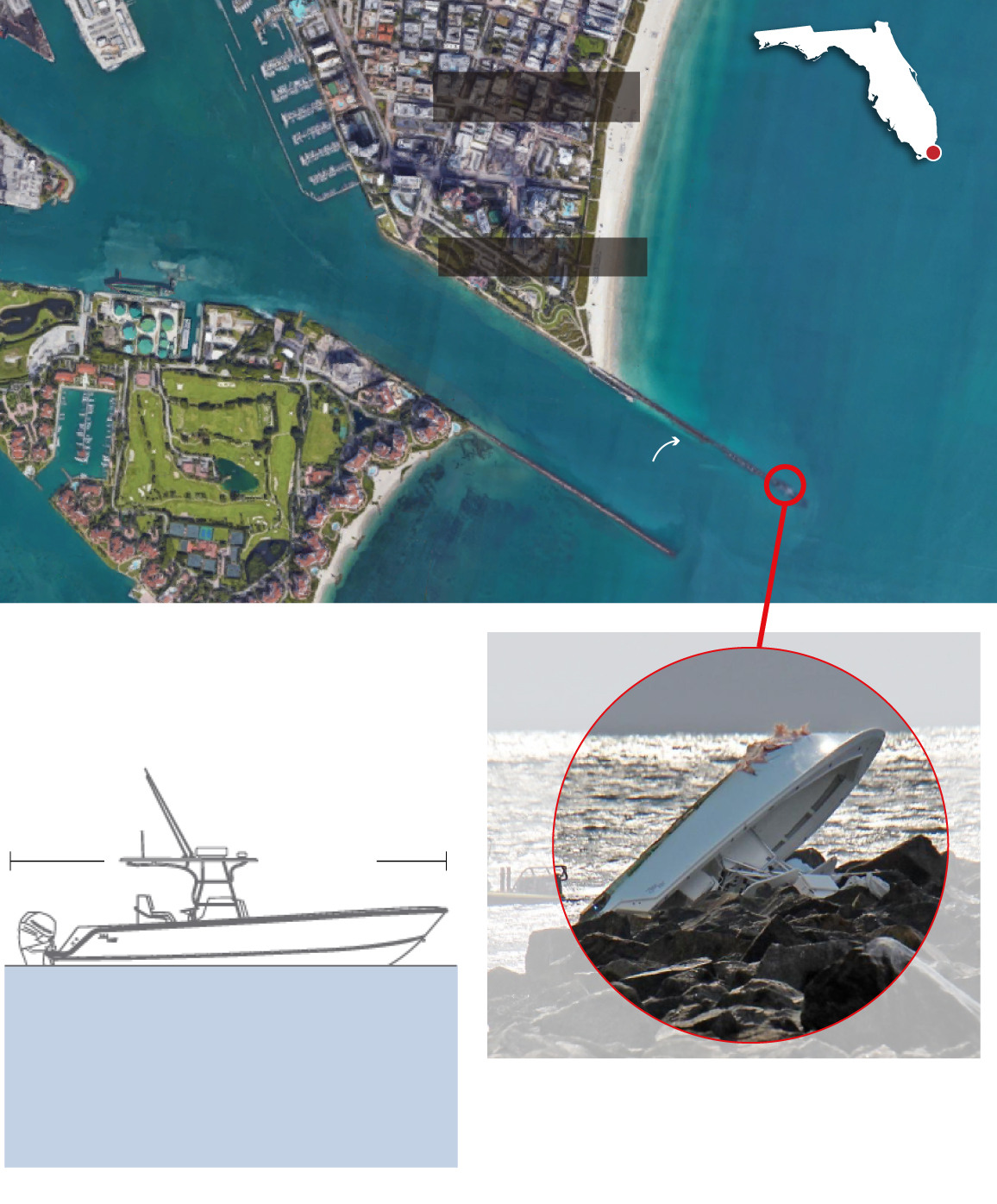 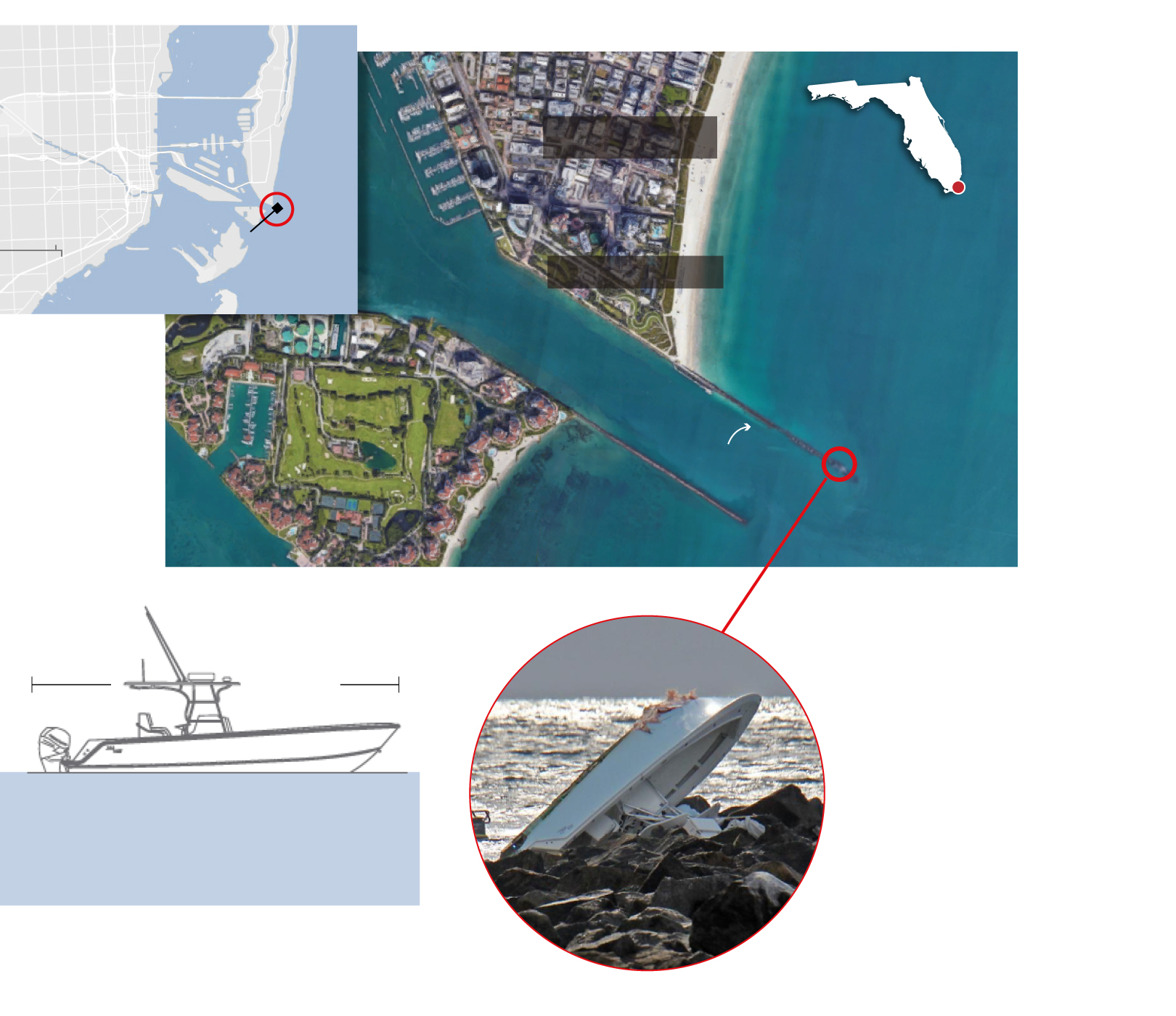 The sport boat, a Sea Vee vessel, had a maximum speed of 60 mph

The channel can be dangerous at night when there is high tide as the sea covers the jetty rocks that line the entrance to the port, said Danny Kollwitz, with the charter sport fishing boat, L&H. “There’s no speed limit and the illumination’s not great," he said.

Kollwitz was out catching swordfish on Saturday night and passed the accident scene as he returned early Sunday. “We saw the boat. Looks like it smoked those rocks and flipped. It was upside down, the whole fiberglass bottom was ripped out,” he said.

Curt Obront, an avid boater and criminal defense lawyer said "it looks as though the boat was running south inside the outer marker which is an accident waiting to happen because the jetty wall sticks out."