Despite being the nation’s largest minority group, Hispanics are still largely underrepresented in politics: they’re almost a fifth of the population, but make up only 1% of all elected and appointed officials in the United States.

That was the conclusion of a Univision News analysis of data provided by the National Association of Latino Elected and Appointed Officials (NALEO), which compiled a detailed registry of all Hispanic local, state and federal public officials for a period of two decades, from 1996 to 2016.

Although the number of Latinos in government went up about 61% in the past 20 years, their representation in politics actually went down. The reason? The explosive growth of the nation’s Hispanic population, which went from 28 million to 55 million in that period. The population's involvement in politics didn’t grow as dramatically.

There are currently 6,176 Latinos among the more than half a million elected officials in the United States. A large numberwork as school board members, but others are mayors, commissioners, judges, state senators, governors and Washington, D.C., legislators.

This calculator shows how many Latino elected officials are currently serving by state, office and gender:

The number of Latinos grew in all levels of government

Univision News traveled to Tennessee, New Mexico and Idaho to meet some of the Hispanic elected officials who are doing politics in unexpected places.

“We went from being a majority white government to an entirely Latino government with two women, one of them being the mayor,” said Ismael Fernández, a council member in the city of Wilder, Idaho. In 2015, this small community elected Idaho's first ever all-Hispanic city government, in a state where whites are still by far the largest group. (Read the full story on Wilder here.) “I’m very proud of that. I’m a true believer in representative government.”

“I never thought that someone who talks like me, who looks like me and who has my family history could get elected,” said Tomás Vallejos, a former gang member of Mexican descent who became the first Hispanic commissioner in Tennessee, a state where only 2% of voters are Latino. (Read Vallejos' full story here.)

Finding Hispanic leaders like Fernández and Vallejos in the United States is becoming more and more common, but the fact is that Latino representation in government remains low. In fact, Hispanics are less represented in public office than African Americans, who held about twice the amount of elected offices in 2010 than did Latinos, despite the fact that they’re 12.4% of the population (compared to 17% for Latinos).

Latino influence extends across the U.S.

An Idaho city led by Latinos, a Tennessee commissioner who used to be a gang member and an attorney general fighting corruption in New Mexico: Univision News puts a face on a generation of Latinos in power.

From gang member to elected leader

In 2010, Tomás Vallejo became the first Hispanic commissioner in Tennessee.

A city in Latino hands

Wilder is the first town in Idaho to have the first entirely Hispanic local government.

The first lawyer in town

New Mexico’s Attorney General received the most votes of any candidate in the state in 2014.

In the past two decades, Latinos have achieved political power across different branches of government.

In 2005, for example, Alberto Gonzales became the highest-ranking Latino in the history of the executive branch when President George W. Bush appointed him U.S. attorney general. In 2009, Sonia Sotomayor became the first Hispanic justice on the Supreme Court. And a year later, New Mexico elected Susana Martínez, a Republican with Mexican roots, as the first Latina governor of a U.S. state.

There have also been local pioneers, such as Melissa Mark-Viverito, a Puerto Rican woman who became the first Hispanic elected as Speaker of the New York City Council, and Mónica Márquez, the first Latina judge on the Colorado Supreme Court.

And with the upcoming November elections, Latino power in government could grow even further. There are currently Hispanic candidates running for high office in 38 different states. In the U.S. Senate, the number of Latinos could grow from three to five; in the House of Representatives, from 29 to 36. And in state legislatures the number of Hispanics could go from 307 to 325, according to a NALEO report. 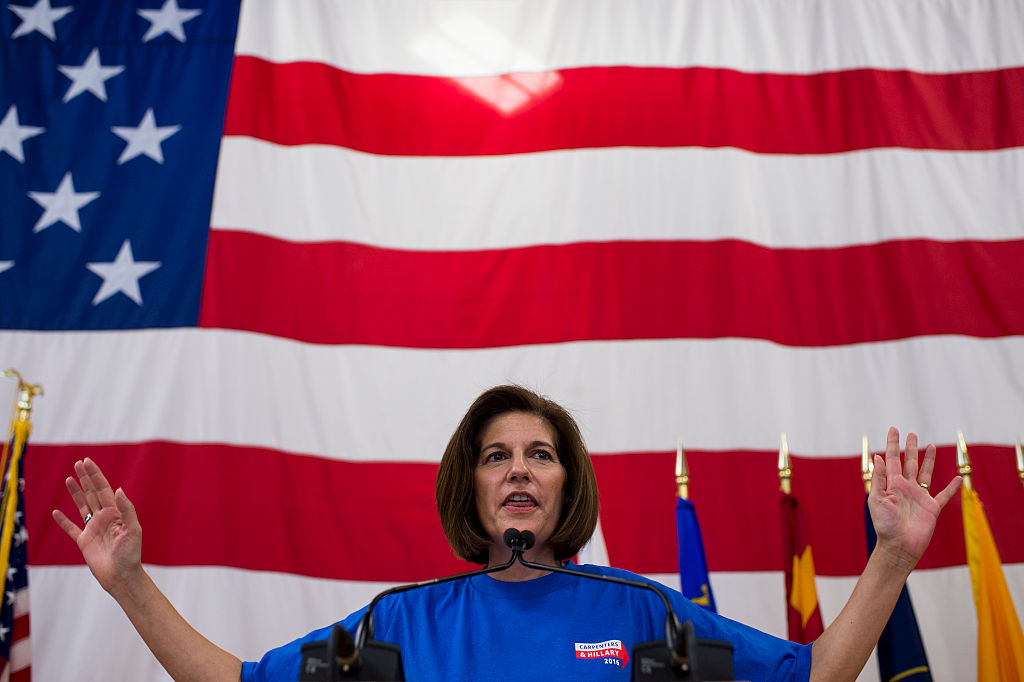 The power of women

Latinas led the growth in numbers among Hispanics in government in the past two decades: they currently represent more than a third of all Hispanic elected officials, and in 20 years went from holding 907 offices to 2,202.

Linda Sánchez (D-CA 38th District) is one of nine Latinas who currently serve in the House of Representatives. "One of the biggest obstacles for Latinas is the wage gap,” Sánchez told Univision News.

Sánchez chairs the Congressional Hispanic Caucus (CHC), a group of legislators in the House of Representatives. She believes the level of Latino representation in government suffers due to the Hispanic education gap. "Our communities aren't graduating from high school at the same level as white communities and they don't have equal access to people with financial resources to invest in their campaigns," she said.

In 1996, there were 28 states that didn’t have a single Hispanic woman in elected office. That number went down to 11 in 2016. In Texas, the number of Latinas in elected positions doubled in those two decades, while the number in New York and Illinois grew sixfold. The difference is most notable in places like Michigan and Oregon, where there were no Latinas in elected office two decades ago, and there are now 12 and 10, respectively.

State legislatures also saw an increase in Latina senators and representatives, rising from 39 to 98 in the past two decades. However, the percentage of Latinas in state legislatures is smaller than that of African American women, even though there are less black women in the country than Hispanic ones.

“I can’t breathe”: a Hispanic man who was held by the Arizona police for 12 minutes during his arrest

The most powerful elected Latinos

In 1996 in Washington, D.C., there were no Latino legislators. At that time, the last to hold the office—Joseph Montoya—had left in 1977. But that has since changed. In the last two decades, six Latinos were elected to the Senate, including three who are currently serving: Marco Rubio (Florida), Ted Cruz (Texas) and Bob Menéndez (New Jersey).

A similar shift happened in the House of Representatives, where there are now 29 Latino legislators, almost twice as many as there were in 1996. No Latina has ever been elected to the Senate; this year, two Democrats—Catherine Cortez Masto, from Nevada, and Loretta Sánchez, from California—could become the first.

The difference between states

New Mexico is the state with the highest rate of Latino elected officials: there are 69 Latino officials per 100,000 Hispanic residents. One of them is the state’s attorney general, Héctor Balderas (read Balderas’ full story here). In 2014, he got the most votes out of any candidate in that state during the midterm elections; he garnered more support than the reelected governor, Susana Martínez, who is the first female governor of New Mexico and the first ever Latina governor of a U.S. state.

After New Mexico, the other states with the highest rate of Latino officials are Texas, Wyoming, Arizona and Colorado. California, the state with the largest Hispanic population in the country (14.9 million), is ninth on this list, with only 9 Hispanic officials per 100,000 Latinos.

Five states— Alabama, Mississippi, South Carolina, North Dakota and South Dakota—as well as Washington, D.C., are at the bottom of the list. In 2016, there were no Hispanic public officials in these places, according to the NALEO data.

School board members make up the largest number of Hispanic officials in the United States.

They manage public schools, hire superintendents and dictate local policies on education. There are currently 2,344 Latinos working in local school boards, a 90% jump from 1996.

Having Hispanics in school boards helps the performance of Latino students

Texas schools have shown that the presence of Latinos in these public offices has a genuinely positive effect, beyond symbolism or pride.

In places like Texas, their presence has had a positive effect. Several studies have shown that the more Latinos there are in school boards, the more Latino students go to class, pass standardized tests, register in advanced courses, take college admission tests and get good grades.

A study by researcher Ricardo Ramirez, a professor of political science at the University of Notre Dame, found that the likelihood that Latinos trust the federal government "most of the time" increases by 4% when there are Latino representatives in Congress.

"This suggests that increased representation in Congress may have important policy implications for the Latino community, a population whose political prominence continues to grow," Ramirez wrote.

"Many Hispanic elected officials are very familiar with the issues facing the Hispanic communities they represent, and can work effectively to solve them," she said.

There are some elected Hispanic officials in areas that are not predominantly Latino, evidence that they're gaining votes from the general public, Gold added.

That’s the case of Rep. Raúl Labrador, a Latino who represents one of Idaho’s two congressional districts in the House of Representatives.

“ My background affects how I think about issues, but I don't think about my background,” Labrador said in an interview at a town hall meeting in Idaho, a state whose population is 80% white. “I’m not a Puerto Rican congressman. I'm a congressman who happens to be Puerto Rican. And the people of Idaho have embraced me."

And what effect does the presence of Latinos in Congress have on policy? Their pressure on other legislators and their work toward specific policies has had a significant effect on the country, says Pili Tobar, spokeswoman for the Latino Victory Project.

For example, Latino legislators pressured President Barack Obama to launch his executive actions on immigration. That includes Deferred Action for Childhood Arrivals (DACA), launched in 2012, which protects more than half a million young immigrants from deportation and gives them work authorization. Obama also launched immigration programs in 2014: the expansion of DACA and a similar program for undocumented parents of U.S. citizens and legal residents, though these initiatives were later suspended due to a lawsuit.

"The role played by several Latino officials, including Luis Gutierrez [a Democrat congressman from Illinois] and the Hispanic Caucus was decisive and shows the value of having these official positions representing our interests," Tobar said.

Immigration policy is one of the areas most affected by Hispanic leadership. Senators Marco Rubio and Bob Menendez were part of the group of eight senators who drafted an immigration reform proposal in 2013 and were instrumental in passing the plan in the Senate, though it ultimately failed in the House of Representatives.

...and on Hispanic voter turnout

The number of elected Latinos can also have an effect on their demographic political participation.

Barreto found that the presence of Latino candidates increased the rate of Hispanic voter turnout in all of them, more than that of other ethnic and racial groups.

Even in areas with high concentrations of Latinos, Hispanic voter turnout was more likely to increase if there was a Latino candidate on the ballot, the study showed.

"As the political landscape changes in the twenty-first century and Spanish-surname candidates become the norm in American elections, pundits and scholars alike will need to revisit the question of Latino and minority participation," he wrote.

NOTE: NALEO's database is only of Latino elected officials. It does not include those appointed to office, such as Justice Sonia Sotomayor, cabinet members, or the many thousands of Latinos appointed to other federal, state and local offices.