Hurricane Irma hit the small Dutch-French island of Saint Martin on September 6, destroying homes, boats, businesses and vegetation. It also taught the island a lesson: that houses should have concrete roofs. These two Venezuelan architects tell Univision how the hurricane will affect building codes going forward.

They transformed their apartment in the Cupecoy neighborhood into a bunker. Six layers of pure pine wood protected the walls outside. The door was locked with five deadbolts. Two small holes in the wood were the only way to peer through the window.

During the storm, Gabriel Antúnez pushed his body against the main door to resist the wind. His wife, Susana Díaz-Granados, locked herself in the bathroom with her seven-year-old son, a flashlight, an iPad and a pair of headphones to block the deafening roar of the hurricane.

There is going to be a 'before Irma' and an 'after Irma': here’s how the hurricane may change construction

“If the hurricane had lasted an hour longer, there was no chance that [our door] would have held,” Antúnez says.

At just 34 square miles, Saint Martin is split into two parts, overseen by the governments of France and the Netherlands. It was one of the islands hit hardest by Irma.

The Saint Martin neighborhood most affected by Hurricane Irma

When the storm ended, they stepped out of her home to a horrible scene: it looked as if time had stopped. “I saw people walking with bags like zombies, like in a horror movie. It was a very sad moment,” Díaz-Granados says.

Irma was a wake-up call. Now, the architects are working with residents to rebuild homes that are more hurricane resistant. “People now see the importance of concrete roofs,” Antúnez says.

Irma destroyed the island’s vegetation, swept beaches clean, and destroyed countless cars and hotels, devastating businesses and homes. Roofs took the brunt of the storm. Across the island, homes are now covered with blue tarps.

After Hurricane Luis in 1995, Saint Martin learned how to build homes made of concrete. But either due to the cost or a lack of information, many people continued to use roofs made of zinc, a type of metal. Those flew off easily during Irma.

Now, people are rebuilding. In mid-November, James, a 70-year-old builder, instructed workers to build a concrete roof on his 90-year-old mother’s home, who lives in the Cole Bay neighborhood.

“Hurricane Donna blew the roof in 1960 and we rebuilt it with zinc. That roof survived Luis in ’95, but during Irma, an object broke its structure and water and wind got in,” James says.

Until Irma, Luis had been the main point of reference when it came to destruction on Saint Martin. After that storm knocked out the electrical grid for months, authorities decided to put a good part of the electrical system underground. It was expensive and an inconvenience to the public, but it was worth it.

“We’re an easy target; we’re the first to receive the hurricanes that come in from the Atlantic,” says Ramiro Hernández, the chief of operations of the water and electricity company, GEBE, on the Dutch side of Saint Martin.

After Irma, the island restored electricity fast with the new system: by mid-December, 90% of the population had lights, and 100% had running water.

If Luis taught the importance of an improved electrical system, Irma showed that the island needs cement roofs. As Antúnez explains, roofs made of tile or zinc can fly away easily, damaging other properties.

“Concrete prevents projectiles and keeps trash from entering the living space, and I believe that this is the foundation upon which we should focus hurricane-resistant design,” he says.

But concrete can run for double or even triple the cost of zinc, and often has to be shipped from the United States.

Lizzy, owner of Lizzy’s Kitchen and Bar, says cost is a factor in her rebuilding plans. Her colorful restaurant in Phillipsburg, the capital of the Dutch side of the island, was totally destroyed by wind and water during Irma.

She plans to rebuild with cement and zinc, but the bar will still be made of wood. “In the event of another hurricane, I’ll bring everything inside,” she says. “I’d like to rebuild entirely of concrete, but I can’t,” says the woman, who is of Guyanese origin.

Meanwhile, a dozen construction workers are trying to rebuild her bar in time for high season, which lasts throughout the winter.

Irma’s 185 mph winds made a shipwreck of the yachts that normally dock in the island’s ports and scared away cruisers and tourists who arrive each week to sunbathe and shop.

According to tourism director Rolando Brison, the Dutch part of the island lost 70% of its hotels as a result of the hurricane. Across the island, luxury hotels are totally destroyed, like Sonesta Maho, which lost its roof and part of its structure, or Westin Dawn Beach Resort and Spa, where the storm damaged a large part of the solar panel system that provided electricity.

In addition, the Princess Juliana airport, known around the world for its proximity to the beach, was closed for more than a month. Because of the extensive damage suffered by the building, improvised counters have been made beneath tarps to serve as the arrivals and departures area since the airport reopened in October.

For that reason, he insists rebuilding is needed urgently. But, he says, it needs to be smart.

“If beforehand our parameters were for winds of between 160 to 180 mph, now we know that the materials have to have a tolerance for the 200 mph barrier,” he says.

Continue the journey:
US Virgin Islands
Free wifi networks to avoid being "forgotten" by the United States 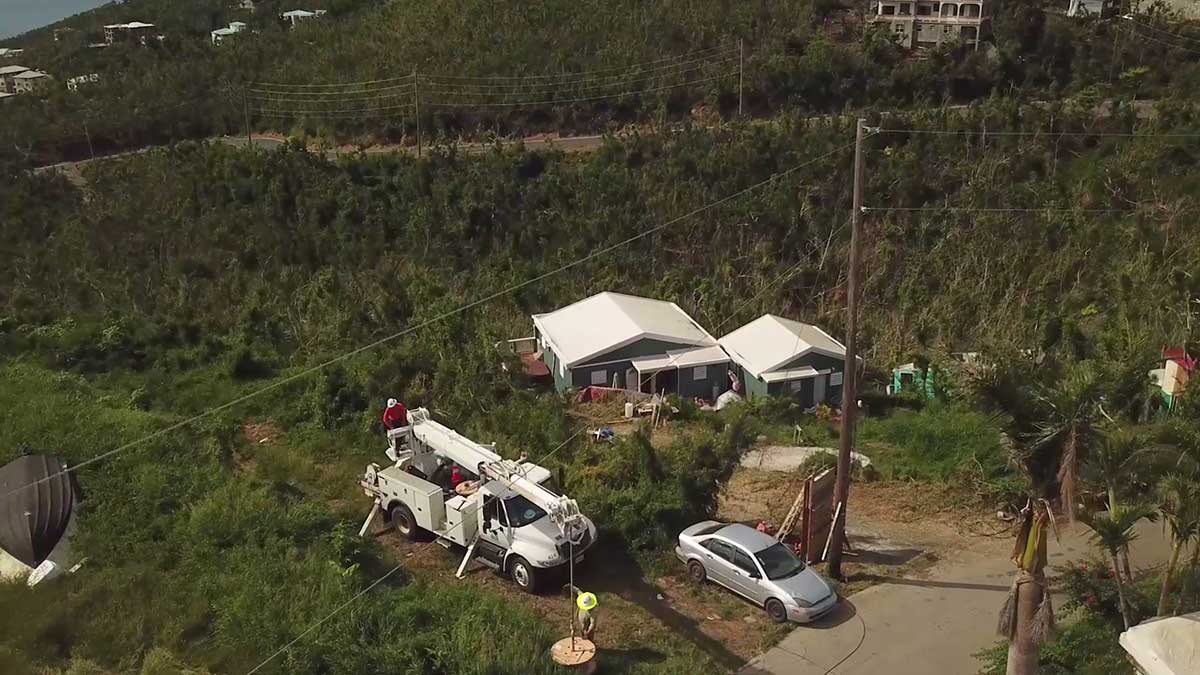