The most powerful hurricane ever recorded in the Atlantic left more than 1,600 climate refugees when the entire population of Barbuda had to be evacuated to neighboring Antigua. But for many, what came next was even worse. The government has threatened to take advantage of reconstruction efforts to commercialize communal lands. Until now, they’d been handed down through generations.

Hermita Thomas, 60, has seen a lot of storms throughout her life. But she never imagined one would force her to leave her home. After Irma struck Barbuda and the government announced a mandatory evacuation order, she resisted abandoning the island.

But as another storm, José, brewed in the Caribbean and threatened more damage, police forced her onto a boat to the nearby island of Antigua, the larger of the two main islands that make up the nation of Antigua & Barbuda. She became one of Barbuda’s 1,600 evacuees.

Since then she’s been living with her octogenarian mother and some of her seven children and 14 grandchildren in a the office of a cricket stadium in the capital, St. John’s, the largest shelter for hurricane evacuees.

For weeks the government wouldn’t let them return to Barbuda. “We’re being held hostage here,” she said, sitting among mattresses. “We’re sleeping on the floor and I have a pretty bed in my house.”

The longer Thomas was kept away from Barbuda, the more suspicious she grew of the government’s plans at home.

Her suspicions were borne out soon after, when the prime minister announced a plan to commercialize a previously informal communal land use system on the island. The government also quickly allowed construction crews back onto the island to work on a new commercial airport.

Barbuda residents worry about government’s tourism development plans. In 2014 the government signed an agreement with the Paradise Found foundation, headed by actor Robert De Niro and the Australian multimillionaire James Packer, to build a hotel on Barbuda.

“Who allowed a construction team to come work on the land and build an airport when locals can’t return to their homes?” councilmember Wayde Burton asks.

For the first time in its recorded history, on Sept. 8, Barbuda became a deserted island. For evacuees, it was the beginning of a period of uncertainty. With 90% of the island’s infrastructure destroyed, trees knocked down and virgin beaches damaged, the government of Antigua & Barbuda estimated that reconstruction would cost between $200-$250 million, money it didn’t have.

Without inhabitants or infrastructure, Irma suddenly turned Barbuda into a blank canvas, giving rise to two competing visions for the future of the island. On one hand, the government wants Barbuda to become a more developed tourist destination, which would mean ending a traditional system of communal land ownership. But residents like Thomas oppose that. They don’t want to give up their paradise.

In the weeks following the hurricane, a small number of people traveled back to Barbuda each day on a government ferry, returning at night to Antigua.

On one morning in late September, dozens of people lined up on the dock in St. John’s. Whereas before, enormous cruise ships visited the island every week, now just 50 residents board a ferry, armed with machetes, saws, rakes, generators, water and food, to cross the sea to Barbuda to help with post-hurricane clean-up.

A serious-looking soldier decided who could travel on the boat. “Work is the main objective of this trip,” he said, “to clean up the area so you can return, understand?” He then read off a list of names of those who can board.

Many were returning to the island for the first time since Irma. Others had already traveled back.

Besides these sparse visitors, Barbuda is now occupied mostly by animals who were abandoned by their owners. Pets weren’t allowed aboard evacuation planes and boats.

Animals roam freely among the debris. In the island’s town center of Codrington, donkeys walked along the airport’s runway, which can only handle private helicopters for the time being. Horses, goats, pigs, and chickens also inhabit abandoned parks, gardens, homes and businesses, as do dogs and cats.

The storm left behind a landscape of destroyed homes, some growing mold. The hurricane flattened hospitals, schools, businesses, and public buildings, which will take months, if not years, to rebuild.

The sound of debris blowing in the wind was punctuated only by pig snorts, donkey brays and other animal sounds.

One of the first to step off the ferry was a man who walked towards a devastated street, his head down. With a dog at his side, he headed to his home, and emerged shortly thereafter with a number of bundles: some of his son’s belongings and shoes and clothes for his wife. Everything he was able to recover fit into two bags. “I haven’t been able to find some of the things my wife asked me for,” he said.

Wanda Desuza headed to her restaurant, Wanda’s Grill, one of the few buildings that survived the storm. She wanted to be able to feed the workers coming to clean the island. “If I don’t do it, who will?” she said. “Somebody has to come to start the building here and you can’t do that with no food.”

It won’t be easy without drinking water, electricity or telephone service. But Desuza said residents should return to recover what belongs to them. “This is our home ... we built [it] with our hands,” she said. “We need to let people return to Antigua to move forward.”

After Irma, this deserted Caribbean island was taken over by animals

Three weeks after Irma, on Sept. 29, the government finally lifted the mandatory evacuation order and permitted Barbuda’s residents to return. But with limited utilities and buildings in ruin, few have done so. According to councilmember Burton, only 200 to 250 residents have returned , less than 15% of the population.

Barbuda after the storm

“The people want to rebuild, but they don’t have the resources to rebuild everything,” he said. “They can’t get here, there are no communications, there are no materials, and now they’re mentioning this idea of selling land again.”

The cricket stadium will close as a shelter on Dec. 31, leaving the 130 remaining evacuees without anywhere to go. They’re expected to return to Barbuda, but many will have nowhere to live, Burton warned. He is a member of the country’s opposition party, the Barbuda People’s Movement.

In the stadium, Freeston Thomas, 67 (no relation to Hermita), drew what he imagined the future will look like when he returns to his home.

“I want to change a few things to be more resistant to future hurricanes,” he said, showing off the pages of his notebook, where he’s re-designed his house. Irma’s 185 mph winds tore off the zinc roof and sucked out the interior.

The majority of the evacuees in the cricket stadium said they want to return to their island. They described it as a paradise, where everyone knows each other, and where people can sleep with the door open because crime, they said, is virtually non-existent.

“There, you live without worries. You can walk anywhere: to the beach, to the forest, to collect coconuts…. You can swim, fish,” Freeston Thomas said. “I’ll wait until it’s safe to return, to rescue what I can and begin to work from zero.”

Land for a dollar

During the weeks of forced exile, many grew increasingly suspicious about the government’s plans for the island. Just a few days after the hurricane, the prime minister of Antigua & Barbuda, Gaston Browne, announced a plan to regulate property by selling land to current occupants for $1. Traditionally, Barbuda has been ruled by a system of communal ownership, through which neighbors pass down land from one generation to the next.

But Browne’s administration declared that land titles must now be registered with individuals owners, not the community. That way, authorities say, citizens can apply for loans and mortgages to fund necessary repairs. “It’s a form of empowerment,” the prime minister told parliament.

For their part, the residents of Barbuda point out that this drastic measure runs counter to a 2007 law that prohibits the sale of land. They fear that these measures and the process of rebuilding will change the character of Barbuda and that it will end up looking like Antigua.

With more than 80,000 residents, Antigua is more populated and economically developed. It’s dependent on tourism and offshore banks, and it’s overrun by foreigners who visit on cruise ships and stay at luxury hotels or vacation homes. Some 40 miles away, Barbuda has managed to maintain a low-key vibe, reserved for those who were born there.

Until Irma’s arrival, its residents depended primarily upon fishing and farming. Cruise ships don’t travel to Barbuda. Any tourism business had to be approved by the majority of the population, according to the Barbudan Land Act, which regulates land possession.

That’s why residents view authorities’ plans as out of step with the island’s character.

“I’m not at all pleased with what the government wants to do,” said Desuza, the owner of Wanda’s Grill. “This land belongs to the people of Barbuda and we will always defend it because this is our home.” Besides her restaurant, a bakery and a supermarket have reopened their doors, running on generators. But there are few other businesses open.

For his part, the prime minister, who has gone so far as to refer to the inhabitants of Barbuda as “invaders” for living on land without titles, insists that the island must have good infrastructure, like an international airport and a cruise ship port. For that, he says, a system of commercial land rights is essential.

Many residents say they, too, want to see the island moving again. But they say rebuilding shouldn’t come at a price.

“There’s no reason to sell land,” Desuza said, even at $1. “It has to be passed down generation to generation. Barbuda is not for sale.” 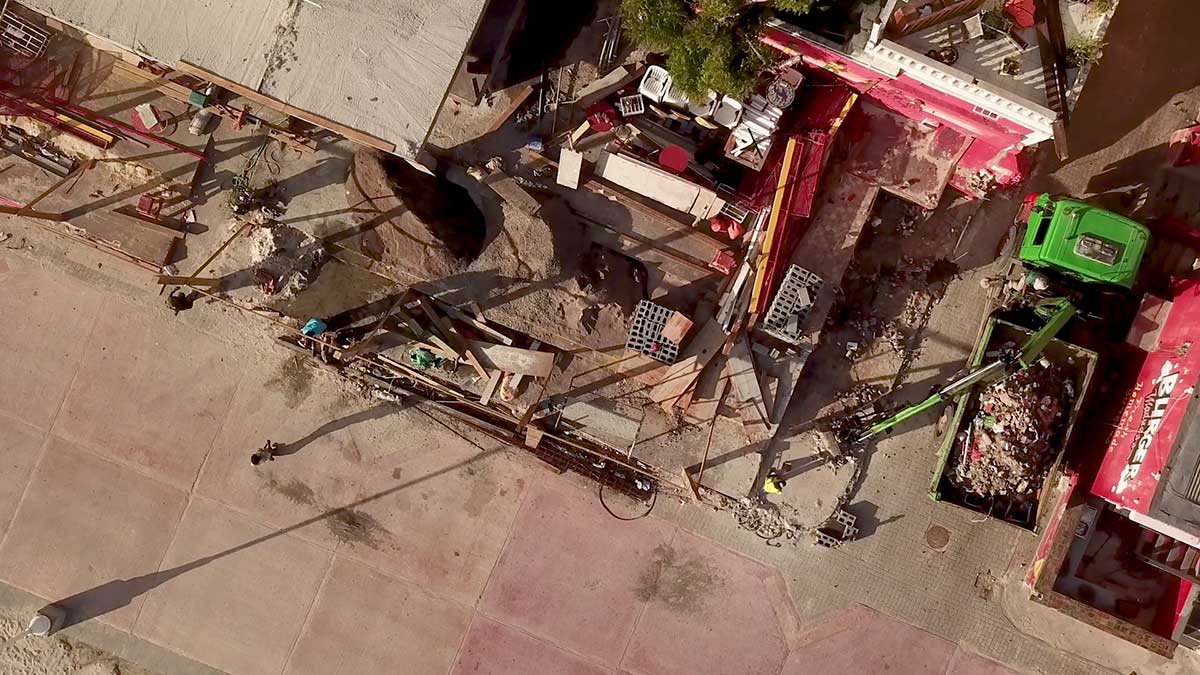