We visited areas of the Caribbean and Florida battered by Irma and Maria. There, people told us how they’re preparing to confront a future marked by climate change, where storms may be more frequent and more powerful.

Only a few days after Irma’s winds settled and the rains subsided, and as the next storm, Maria, was sweeping across the Caribbean, we made a decision to retread the paths of those two hurricanes.

Between September and December, a team of three journalists from Univision News visited eight Caribbean islands and three areas of Florida affected by these storms. We flew almost 10,000 miles, boarding 15 planes and two helicopters, and covered hundreds more in cars, boats and kayaks. The objective: to understand how people in these places are preparing for a future in which storms are likely to grow more intense due to climate change. 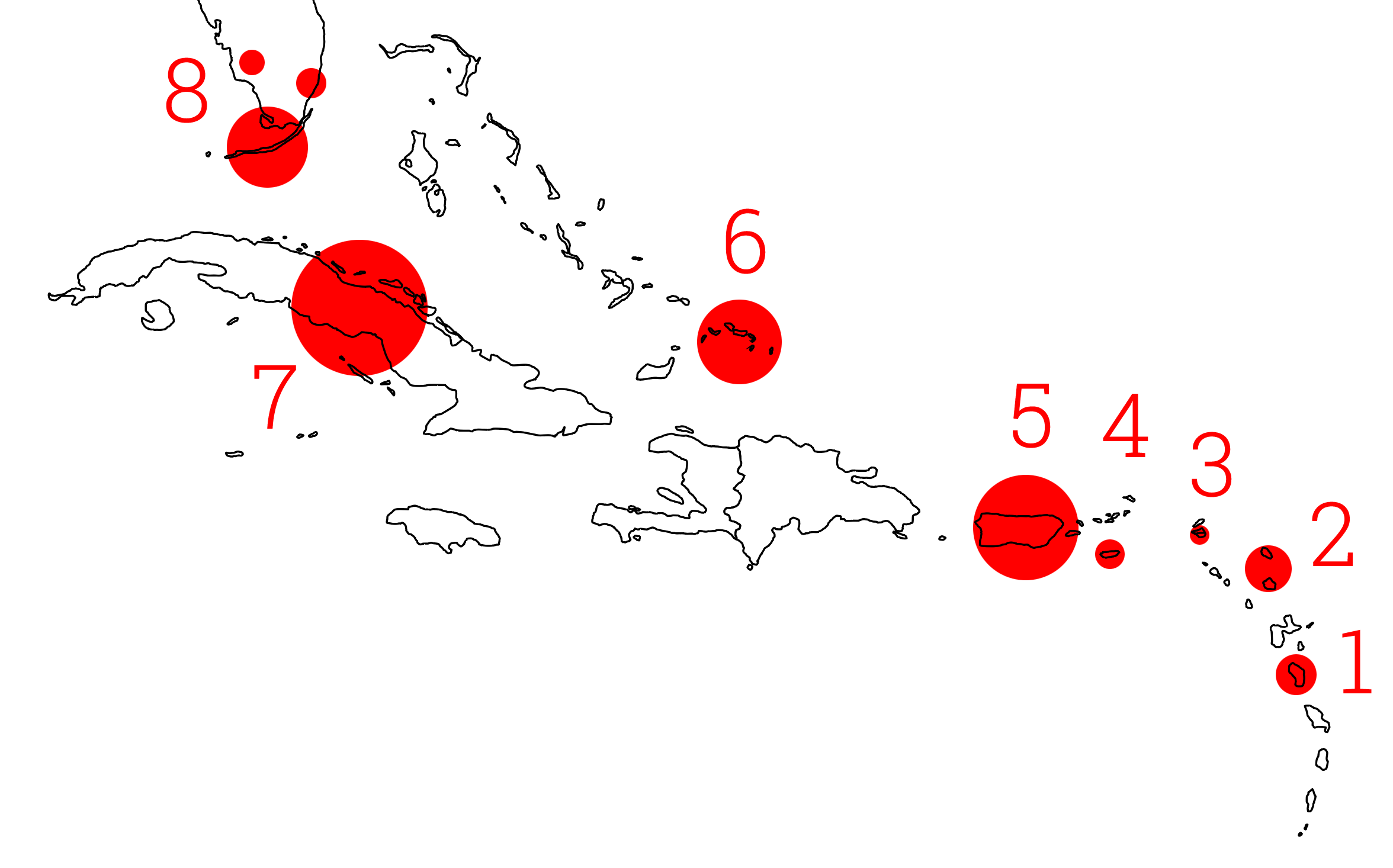 We left Miami after Irma had battered parts of the state. We arrived in Antigua and Barbuda, islands transformed by that Category 5 hurricane, just as another powerful hurricane, Maria, was sweeping across Puerto Rico. Island by island, country by country, we followed the path of destruction. This is what we learned about life in the eye of the hurricane:

What we saw and heard:

Those who suffered through Irma and Maria describe the storms as “monsters” or “demons,” as hurricanes that redefined their notions of destruction. The turquoise of the sea turned yellowish, the green of the vegetation turned brown, and the colorful islands turned gray under piles of debris.

Despite the fact that people in the Caribbean and Florida were accustomed to hurricanes, those who lived through the two storms had run out of words to describe what they experienced. From Dominica to the Florida Keys, people told us how they went to bed in one reality and woke up in another, totally distinct, in which they simply had to try to survive.

Some said it felt like a strange winter had descended upon the Caribbean. We met Urica Joseph, a 30-year-old from Barbuda, in the cricket stadium in Antigua, where his island’sentire population had been evacuated after Irma. He recalled the moment he stepped out of his home during the eye of the storm – it was the first time he’d seen fog in his life. “It was pure whiteness. You could hardly see your neighbor’s house because trees were down, posts, everything. I rushed to my neighbor’s house because their roof came off. And there they were, trying to board it up. Later, I saw concrete houses broken. That’s how strong this storm was. It was bad – very, very bad.”

We repeatedly heard about similar scenes. Over and over, we heard stories of the suffering experienced after the storms, when stores and gas stations were closed, and people without water or electricity had to figure out how to survive. Many said that social classes also dissolved in those days; the hurricane hit everyone equally hard and the suffering was shared by both rich and poor. Many shared a sense of desperation at not being able to pick up the phone and call loved ones to tell them that they’d survived.

The Merriam-Webster Dictionary defines resilience as “an ability to recover from or adjust easily to misfortune or change.” This word, in its fullest expression, described what we saw in each of the Caribbean islands where Irma and Maria unleashed their fury.

When we arrived in Dominica just a week after Maria, we saw an island that had been completely wiped out; not a single tree appeared to be standing. Hundreds of houses were reduced to rubble. The storm didn’t spare the home of prime minister Roosevelt Skerrit, who recounted on social media how his roof flew off and how he had to be rescued. But in the midst of this apocalypse, hundreds of people were also rebuilding their homes. Wherever they could, they looked for water and food, cleared the roads of trees, light poles and debris, and tried to help their neighbors.

In the Caribbean and South Florida, people are as accustomed to living with hurricanes as people in Mexico and Chile are to living with earthquakes. They study them in school; their names are part of popular folklore; they learn to prepare themselves for the storms’ arrival; and, most importantly, they learn to get up again after one hits.

Music after Maria: Puerto Ricans use song to forget the ravages of the hurricane

Hurricanes confront people with the decision to resist and rebuild, or to flee. In many of the islands’ airports, we found hundreds of sad people carrying whatever they’d been able to salvage of their belongings, ready to start their lives anew elsewhere, or to return when the situation improved.

It was there where we witnessed the difficulties of traveling in and around the islands following the hurricanes. Those who wanted to send aid didn’t even know if it would arrive. Some felt that local governments weren’t doing enough or that help wasn’t arriving fast enough, which led to complaints of corruption and poor management.

We also noticed how some Caribbean governments needed help from abroad to rebuild, but didn’t want the world to see images of destruction. In other words, they didn’t want the hurricane to rob them of one of their principal sources of income and employment: tourism.

The storms also left good things in their wake. Many people told us that Irma and Maria offered them the opportunity to become closer to their neighbors. Without normal communication channels, they stopped looking at their phones and started looking into the eyes of their neighbors and friends. In some places, like the US Virgin Islands, the feeling of having been abandoned by the United States gave rise to community initiatives, from free Wi-Fi to evacuations of those who needed to get off the island.

What else we learned:

The Caribbean is a United Nations unto itself. Though each island has a distinct history of colonization (some exist as territories of European countries while others belong to the U.S.), they share a common sense of identity, and it’s usually easy to travel from one to the other. For example, Antigua – which escaped practically unscathed by the storms – opened its doors to evacuees from Barbuda and Dominica. Before Maria, Dominica sent four containers of aid to Saint Martin, Anguilla and the Virgin Islands.

After Saint Thomas and Saint John, in the U.S. Virgin Islands, were leveled by Irma, the third island in the territory, Saint Croix, along with Puerto Rico, sent aid and helped evacuate hundreds of people before being hit by Maria.

A hurricane can change the face of a nation: We saw this mainly in Barbuda, after the government ordered a mandatory evacuation and the island remained deserted for three weeks. Today, only a small percentage of the population has returned home, as the majority of structures are in ruins and some fear that the government of Antigua and Barbuda will take advantage of rebuilding to commercialize communal lands that, until now, residents have passed down from one generation to the next.

Hurricanes put a spotlight on crisis: In Puerto Rico, hurricanes brought into focus the debt crisis, health issues, and the failure to maintain infrastructure. The island descended into chaos after Hurricane Maria hit, which has left some 500 to 1,000 dead, according to independent investigations.

Hurricane Irma, for its part, shone a light on the diverse nature of the housing crisis in Florida. In the Keys, the storm is forcing out workers who lost their homes and can no longer afford to live there. On the west coast of the peninsula, in Immokalee, those most affected were migrant workers who lived in trailers. Many of these homes didn’t survive the storm.

And in Miami, although the city emerged generally unscathed, Irma forced people to face the phenomenon of “climate gentrification.” As sea level rise initially affects wealthy coastal neighborhoods, forcing them to relocate, experts warn that residents in the poorest neighborhoods who live on higher ground will be displaced.

In Cuba , Irma also exposed a housing crisis: on the island, at least 40% of homes are in average or bad condition. The hurricanes destroyed buildings that should have been restored long ago.

More lessons: hurricanes impose new limits on construction. Every powerful hurricane that has passed through the Caribbean and Florida has reconfigured construction codes. With sustained winds of more than 180 mph, Irma became the most powerful hurricane in the Atlantic’s recorded history, and it will serve as the foundation upon which new building standards are based, such as concrete structures and roofs.

In order to minimize the damage of future hurricanes, governments should look toward the future and adopt preventive measures. They should prepare infrastructure and electrical, water, and communication networks to ensure they can sustain hurricanes.

Raúl Salazar, a representative from the UN’s Office for Disaster Risk Reduction (UNISDR), says it’s a good time to explore this.It has to be considered, he says, “in light of the fact that hurricanes are going to intensify, which makes risk reduction measures necessary.”

Furthermore, governments should prepare so that, in the face of a future hurricane, aid can come quicker and not be politicized.

Nature will show up to reclaim her rightful place.

Scientists don’t have enough data to attribute a cause-effect relationship between global warming and the quantity and force of hurricanes. Nonetheless, experts from the U.S. National Oceanic and Atmospheric Administration (NOAA) and NASA believe that the rise in ocean temperatures is a factor that could precipitate the formation of hurricanes, given that the storms feed primarily from warm oceans.

Since NOAA began tracking tropical storms in 1891, there have been 33 Category 5 hurricanes and 11 of those (33%) have occurred within the last 17 years.

With Harvey, Irma, Maria and Nate, the 2017 hurricane season was the most economically disastrous in the history of the United States, according to preliminary reports that estimate the cost to be at least $200 billion.

Thoughts on climate change, from those who lived through Irma and Maria

Everywhere we went we asked those affected by the hurricanes about climate change; you can see some of their answers in the following video. While many people in the Caribbean were very conscious of climate change and see how it impacts daily life, many in Florida said they did not believe it or understand how it impacts them.

This is also reflected in public policy. After Maria, the President of Dominica went to the United Nations to discuss climate change and mitigation. “I come to you straight from the front line o the war on climate change,” he said. The majority of the Caribbean leaders also discussed climate change. But, like Trump, not even Florida governor Rick Scott believes there is a link between humans and climate change. As such, U.S. leaders are not implementing public policies related to the phenomenon.

Independent of politics, we witnessed the important role nature plays in protecting people from the force of hurricanes. In Turks & Caicos, a well-preserved coral reef on one side of the islands and mangroves on the other side acted as a kind of wind breaker, protecting the island from the hurricane’s full force.

*The authors: A multimedia team of three journalists from Univision Noticias, Lorena Arroyo, Nacho Corbella and Esther Poveda, visited Dominica, Antigua and Barbuda, Saint Martin, the U.S. Virgin Islands, Puerto Rico and the Turks and Caicos. Additionally, in Florida, we traveled to the Keys, Immokalee, to the west coast of the peninsula, and Miami. In Cuba, without government permission to report on-the-ground, we relied upon journalist Elaine Díaz Rodríguez, who, through her independent project, Periodismo del Barrio (Neighborhood News), offered complete hurricane coverage via correspondents sent to different provinces around the island.

Continue the journey:
Dominica
This Dominican family struggles to get by after Hurricane Maria 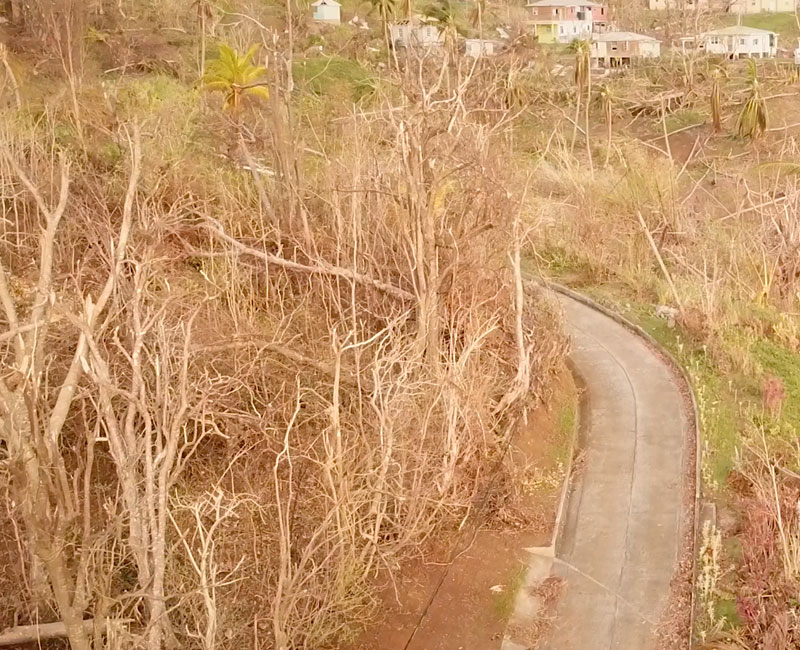